Dynamo lights on a budget

So do you want bright reliable lights that last forever (almost) for about 60-80 quid? Here's how
Battery lights are everywhere, from the cheap pound shop specials that are worse than useless to mega lumens USB chargeable artificial suns from Ebay & beyond.

They all have one disadvantage. At some point they will either die on you mid ride, or you forget to charge them. So you either carry multiple lights, or spare batteries or both.

There is an alternative - Dynamo lights, which seem to be forgotten secret amongst UK cyclists
Most people only remember the horrid bottle dynamos of old that slipped as soon as the tyres became damp and were like riding with the brakes on and were about as effective as a candle in a gale.


Both my bikes which I alternate between for commuting have dynamos which give out reliable bright light without any noticeable drag. I actually run with the lights on permanently during the winter months as there's no gain from turning them off.

Most battery lights are quoted in terms of lumens. This is just the total amount of light put out by the light. Most of them though have no directed beam, so the light shoots everywhere. Dyno lights are made to german SvTZO standards and have directed & focussed beams. It is the focussed area of the beam which is measured in Lux. Sadly there seems to be no direct comparison between the two measures.

This is about dyno lights on a budget though, hence no mention of SON dynamos, or expensive front lights.

Both bikes have budget Shimano DH-3N31 hubs. I bought mine ready built into complete front wheels from Taylor Wheels in Germany at about £40 a wheel, which makes them a quick drop in replacement. Rims are basic but hard wearing and functional. My first wheel now probably has about 6000 miles on it through all weathers and is still true. Wheels are available in all sizes and with nuts/quick release, and with disk brake mounts. I use the hub with wheel nuts to increase security. As I run hub gears anyway which are nutted not having QRs is not a major issue for me.

I originally bought ultra budget Secu-sport LED front lights and broke both.
I'm now running a 75lux Herrmans H-One-S lights on both bikes which is wonderfully bright, and about £25-£30 from EU web shops or Ebay 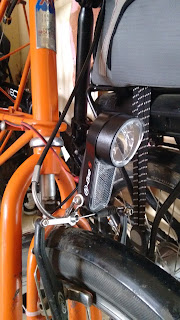 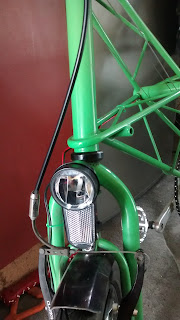 My rear lights differ more, but both are rack mounted.
The first is a Herrmans H-Track which was about £9, and projects a ring of light from central LEDs around a large rear reflector. the second is a B&M Toplight Line Plus (£18) which has a bright horizontal line of light above a large reflector


Both are bright from a distance, and little to choose between them on the road.both of these lights are designed to fit a rear rack with a light bracket with 80mm spaced holes.
For the bike with the Herrmans, I needed to buy a Topeak adaptor for a couple of quid as the rack had a bracket with 2 vertical holes.

Putting it all together

It's very simple to put all this together and make it work. the front lights are pre-wired.
You'll need some 2 core speaker/auto cable & some 2.8mm male spade connectors (Halfords calls them audio connectors) and a crimping tool if you want to make your own wiring to the rear light, or you could buy a ready made cable with connectors. Crimpers & connectors are cheap though.

Any questions, ask away in the comments