When stripping my beloved Moulton down for a repaint when it needed the rear triangle replaced,, I was horrified to find that the seatpost was seized. None of the usual remedies worked including twisting, heating, freezing, cursing, and so for the first time close to 25 years, I had to resort to handing something over to a bicycle repair man.


After a couple of months & a couple of gallons of penetrating lube even they admitted defeat. So once again I was left with a stuck frame. Another month and a bin full of hacksaw blades, saw me contemplating writing the frame off. The white tape on the fram in the photo below is the depth of the post inside the frame 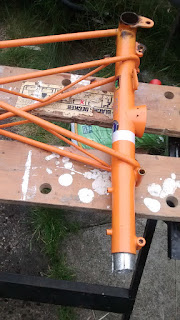 Somehow my desperate google-fu finally fished up the website of John The Seatpost Man. A couple of emails followed and John seemed confident he could succeed.

The rub is that he did remove it. I have no idea how, presumably black magic or other dark arts, but he saved another valuable and loved frame. The seat tube inner now looks factory fresh. Had I found John's service sooner I would have saved months of wasted effort and heartache.

If your post becomes stuck, just go straight to John. Don't mess about with any other "remedies" or workshops.
I cannot recommend his service strongly enough. the man is a genius and a savior

On the bright side, the missus thought the Moulton was a write off so let me buy a new one and I now have two, although one still needs painting & rebuilding at this time