Letters from MP & DfT about cycling

I wrote to my MP around the time of the last cycling debate in October, and received a reply thta he had contacted the DfT & Robert Goodwin on my behalf.

He has now replied back a second time, enclosing a reply from Mr Goodwin.
What's interesting is Stephen Hepburn's (Labour) comments about Labour prioritising cycling in three key areas. Infrastructure, safety and training. 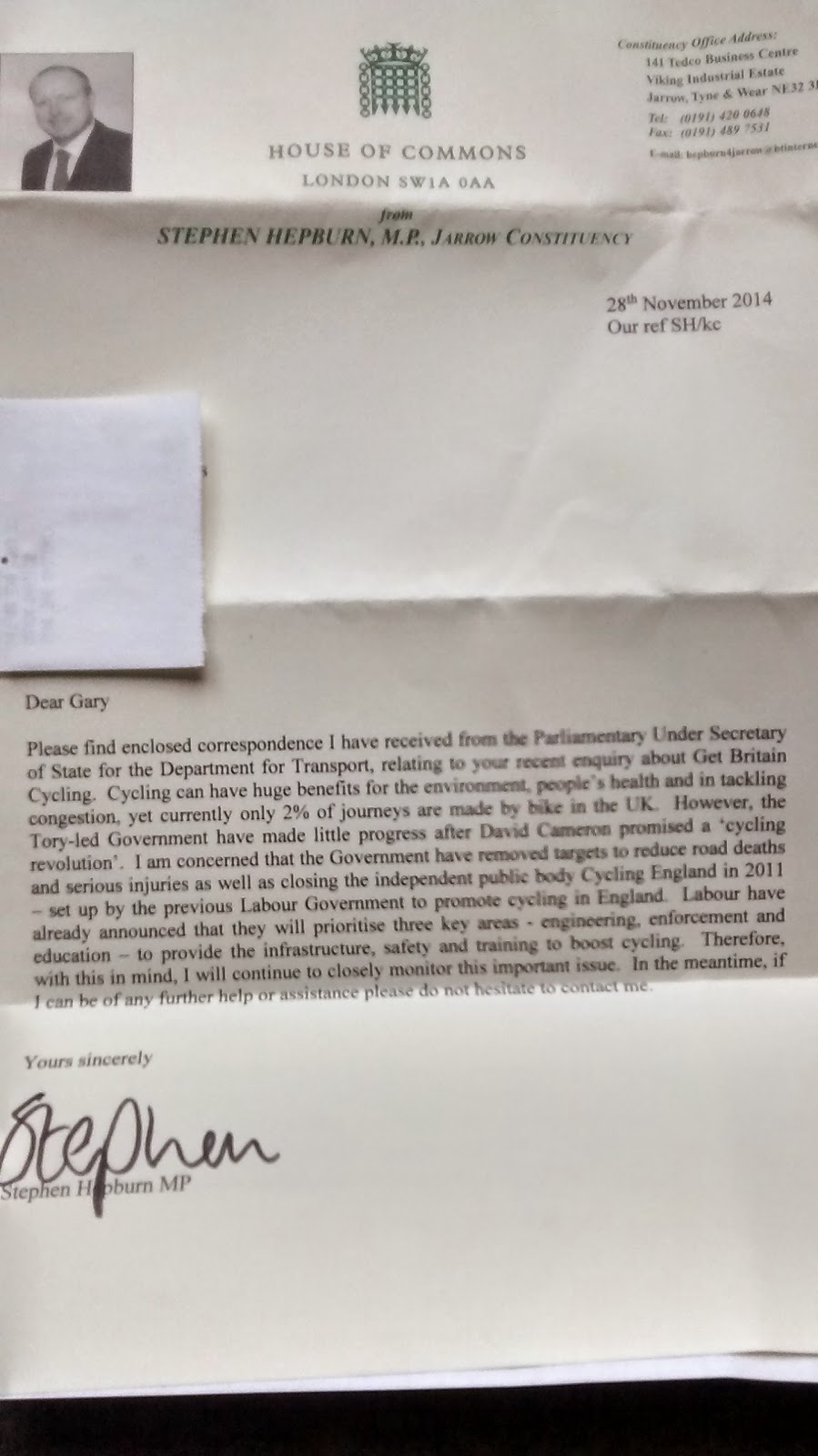 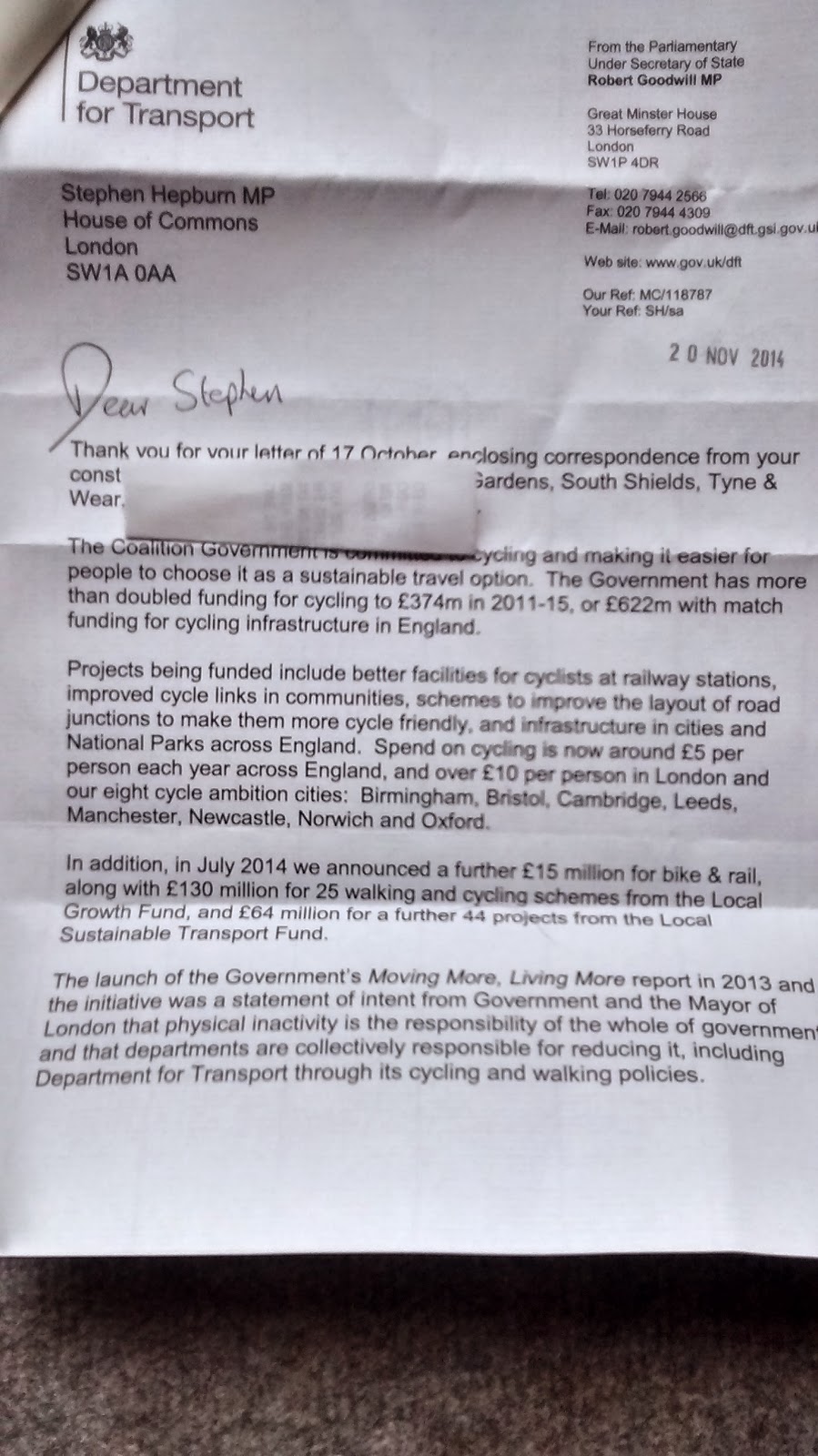 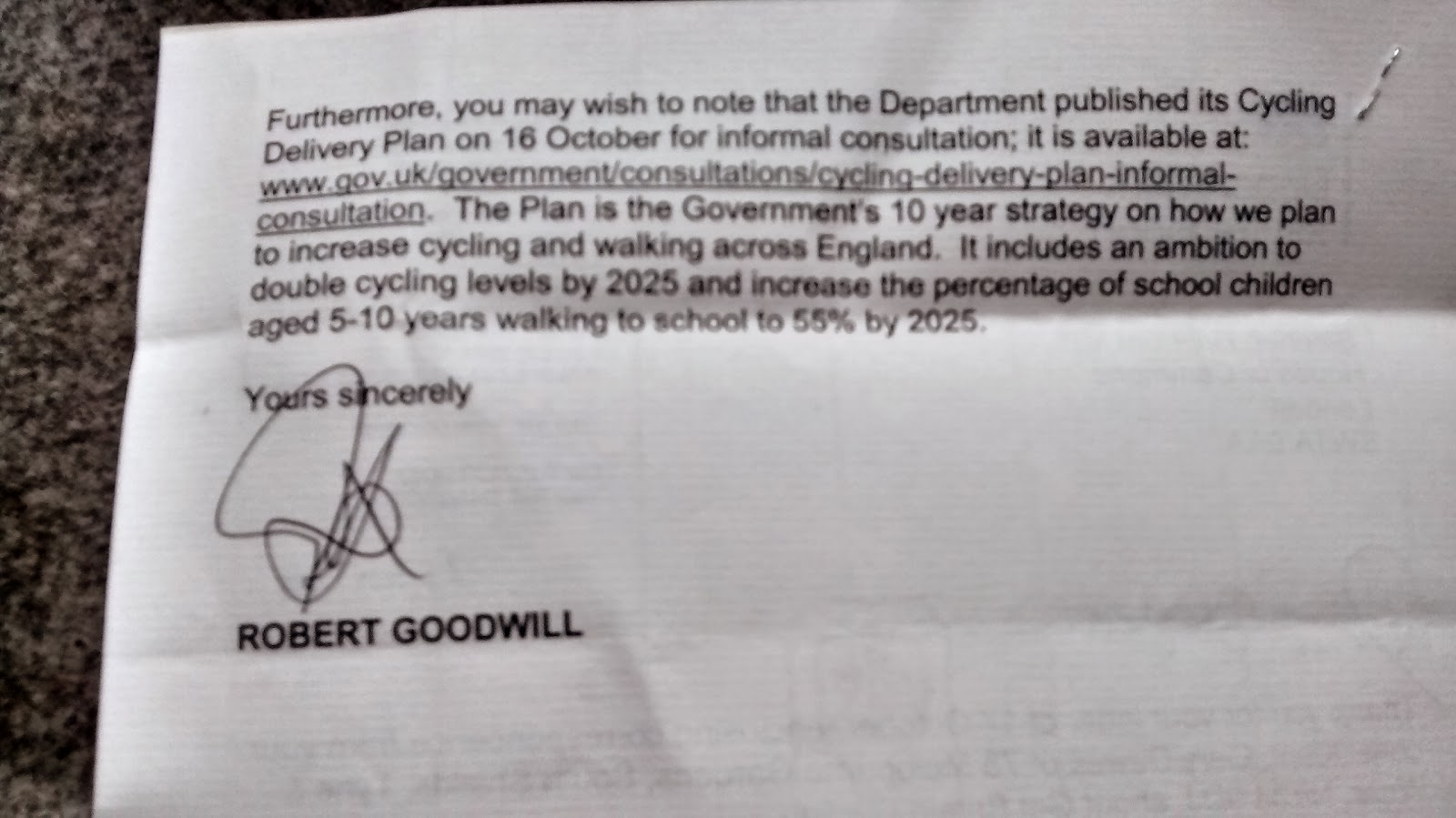 At this time of year even a single trip out on the bike can leave it looking like mine below. That was after a weeks commuting, so you are going to want to clean it. 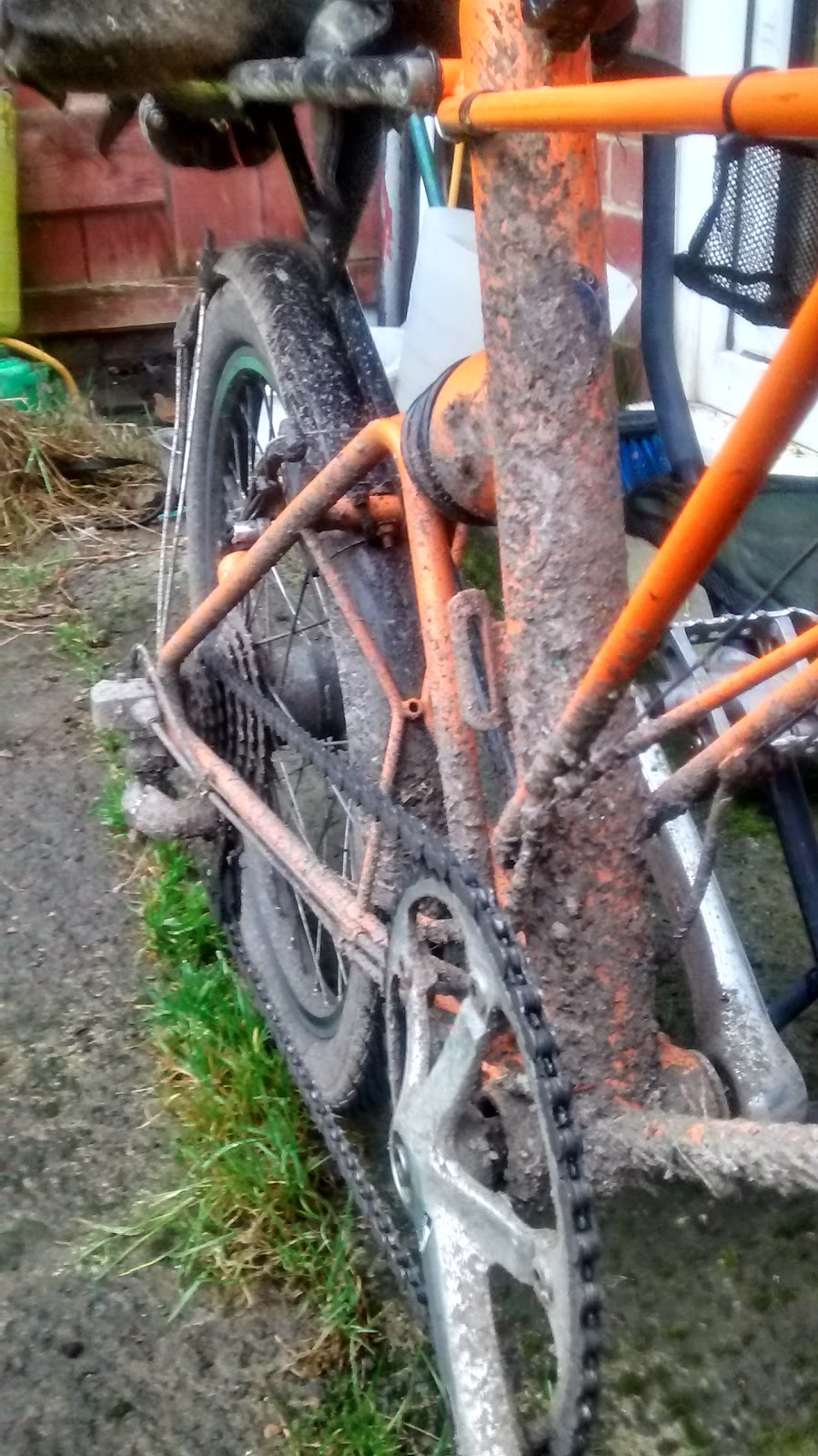 Don't use washing up liquid as it contains powerful salts etc which whilst cleaning the muck of the bike will steadily strip the protection from the paint. Don't bother with the overpriced specialist bike cleaners either.

Do use a decent quality car shampoo will do fine & is a lot cheaper.

Don't use a jet wash or high power hose & just blast the muck off as you will also wash any lube or grease out of bearings.

Do use a nice car wash brush with long soft bristles. Cloths  and sponges are good too, but I find a brush is quicker & easier and long bristles can get to some of the nooks better.

Once cleaned, let the bike dry for a short while if possible then


Then go ride it and get it mucky again

11 Winter cycling tips for the dark

Having good reliable lights in the winter season is a no brainer if there is even a possibility of riding in the dark. It's also the law. You can pick up a set of lights for just a few quid. I would avoid the pound  shop specials. But Bell lights from Asda are OK,and can be picked up with the shopping. It's worth checking the local Aldi as the set they do as a cycling special in September can sometimes still be found instore.

If you are using battery lights, then always carry a backup set or a spare set of batteries. It is worth running 2 lights on the rear in case the batteries die in one.


3 - Invest in a dynamo system

For regular or long distances in the dark, then the best solution is a dynamo, either fitted into a hub or running of a tyre sidewall.

Modern dynamos are much better than the horrid things you used to buy from Halfords which felt like the brakes were on.

Hub dynamos can cost the earth, but Shimano make some extremely competitively priced ones which you can purchase for as little as £30 or so, and they are fit and forget. They never slip and are very low drag so can be left permanently on for short gloomy autumn and winter days

Sidewall dynamos which run off a tyre sidewall are also good,especially if you use tyres like Schwalbe Marathons which have dynamo tracks moulded in. The AXA HR has been around for years and is well regarded as are Nordlicht. If the bike has cantilever/Vee brake mounts, then mounts are available which bolts onto them for dynamos and lights.

As dynamo lights are almost the norm on the continent, then for the best choice and prices, I'd recommend buying from a reputable continental internet store such as Dutch Bike Bits or Rose bikes. You can also buy them ready built into wheels. Ebay is also a good source,but can be riskier. I bought a full wheel from the 'bay for £30, and the whole setup including front and rear lights for under £60.

Whilst on the subject of lights, cheap hi-power LEDs which are basically torches chucking out raw white light are bad for seeing by as they just chuck light everywhere and not where and not in a pool in front of you. These are also poor for oncoming people as they can dazzle. Look for lights which have been approved by organisation such as StVZO


4 - Use Reflectives, and ditch the hivis & flouro colours

Hivis clothing uses UV light to make them seem brighter & stand out. in the dark and on gloomy days, the UV light is either not there or is much reduced & this makes hivis no better than normal clothes. Also street lights tend to wash the colour out, so just pulling on the hivis for the quick trip to the shops does not make you visible.

Instead, look for gear with lots of reflective bits. These reflect (obviously) headlights etc back and in traffic will make you more visible. Reflective patches on legs can help as the movement catches the eye (if the person is looking). if making turns, reflective bands on arms can help as well.
These are in addition to and do NOT substitute for lights though.

Weaing layers of thin clothing in winter is better than one or two thick layers. Several thin layers trap air between the layers, which also helps insulate against the cold. If you do get too hot, then it is easy just to remove a layer rather than be uncomfortable.

Wearing a cap or a helmet with a peak,keeping it low over the eyes means a very slight dip of the head can help to minimise glare from street lights & headlights.

Winter can often have wet & dirty roads even if it's not been raining. Glasses (plain if poss) guard against grit & road muck getting in the eyes.

8 - Know your route, and options

Whilst winter night rides on new roads can be exciting, for regular trips, knowing and being used to the roads on the route will help. Knowing what's around the next corner or where the potholes are is helpful and reassuring.  Knowing alternative routes to avoid busy traffic hotspots, or places where the road floods after rain can also be very valuable.


9 - Use bombproof tyres to keep moving

The last thing anyone needs is a puncture & flat tyre on a dark cold winter's evening. If you haven't, then invest in some top notch tyres such as Schwalbe Marathon Plus as these will almost eliminate the risk. Self sealing inner tubes can also help reduce the risk of a puncture. Keep tyres inflated to the max pressure as well, although if your route has lots of leaf fall etc or it's slightly frosty then dropping the pressures slightly can give a little more grip. If you only carry a small minipump, then if you can, keeping a cheap track pump at work can be a great idea to pop the tyres back up to pressure if you have had an issue on the commute.

Even if your winter ride is just for the winter, keeping it clean and lubricated will make the ride much more pleasant and easier as well as making the bike and components last longer.
A quick weekly wash down and check doesn't take long and can help spot issues before they cause a breakdown mid commute.
Heavy rain can wash a chain of lube in one ride. If possible keeping a small bottle of lube at work is a great tip for such emergencies

Just get out there and ride.