The John Reid road is a typical 60's (built 1963) urban dual carriageway in South Shields linking the A194 in the west of the town to the A1018 Sunderland road. It's a popular route to the coast, and forms part of the Great north Run.

Although it has housing  estates along each side, it used to be a 70 mph limit, but has steadily been reduced to 50, then to the now 40 mph limit. That hasn't made it any safer to cycle along. So the schemes to include cycle facilities along the road was welcomed as it is the direct link up to shopping area at the Nook, and to Marsden and the coast.

The last part of the scheme was completed about 9 months ago, which was the section between Perth Avenue in the west to Galsworthy road. This is a shared facility for people on foot and bikes along the eastbound carriageway. Even though the DC then runs for about another 1/2 mile the cycleway ends at the crossing over the bus only exit at Perth Avenue. It should be noted that the light controlled crossing across the DC at this point is pedestrian only and cyclist are expected to dismount. Also cycles are not permitted though the bus only exit at the lights. 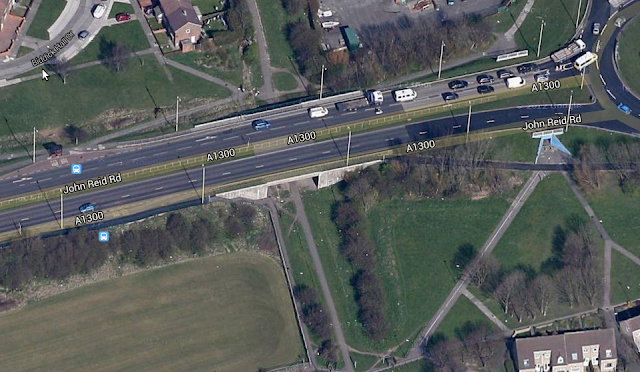 I've clipped the shot above from Gmaps. The JR cycleway runs along the westbound (bottom carriageway). The West Harton cycleway which runs from Boldon lane shops to New Road in Boldon Colliery can be seen running under the old rail bridge. It's a shame that ramps have not been installed to directly connect the 2 cycleways. Connections are left largely to informal desire lines.
The cycleway does dip down to join the separate underpass under the John Reid, but this does not link up to anywhere once north of the DC, and does not formally link to the Harton route either.

Once across Boldon lane, either via the refuge adajcent to the roundabout, or the toucan crossing a few metres down, there is a barriered entry on to the shared path across Temple Park. I really personally detest barriers like these. The LA has not bothered to fence either side, so illegal motorcycles are not prevented from getting onto the path. In my opinion all that is needed is one or two posts which are ideally lockable/removable to allow for maintenance access.

The path is quite wide, well lit for night use, and has signed links to the Hospital, Fire station, Leisure centre, and to the housing estates and schools to the south of the park.

Once past the fire station the path starts to run along the side of the road again, where there is a toucan crossing over to the hospital etc. All links are helpfully signed.


There is another toucan crossing over the road to link to the Westway shared path (pavement) route to Tyne Dock, and also to the on road cycle lanes up King George road to Westoe and onto the Town Centre.

For cycling east to the coast, the route just ends at the large roundabout, so you will need to be able to mix it with traffic from that point.

It is a very useful link from the housing estates in west Shields across to the popular local shopping area at the Nook, and also for people travelling to the schools linked by it, and workplaces such as the Hospital.

Overall it is a good route, but It could be improved by