About a week or so ago, I posted a link to a simple helmet survey I knocked up.
This was in frustration at the simple yes/no leading crap which has being doing the rounds lately on newspaper websites, mainly as a response to a campaign and subsequent comments by Bradley Wiggins, Mark Cavendish, and Laura Trott.

I wanted to get a feel for the sort of person who wanted compulsory helmets, and what sort (if any) of riding they did and how long they had been cycling. It is important to note, that there is no deep academic or scientific basis for the questions or results other than my curiosity.

In the end I only got 90 responses, I was hoping for more but it's still more than a lot of the beauty product "surveys in TV ads.

I wanted to export and post the raw data, but it turns out that SurveyMonkey doesn't let you do that with the freebie, but does let you filter the results. 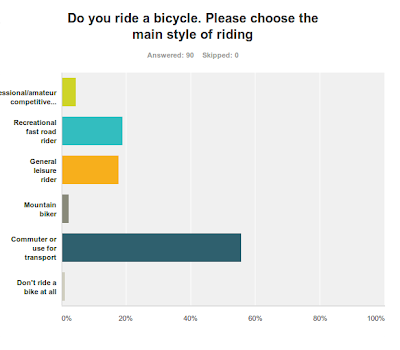 I had hoped that more none cyclists would respond as they also have a valid viewpoint. I found it interesting that by far the largest proportion reported that their main style was commuting/transport. 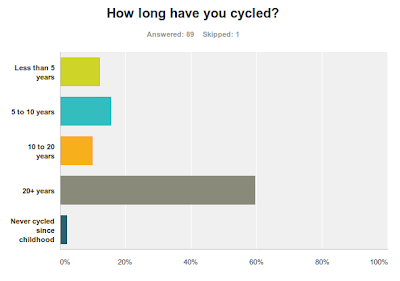 Again, interesting that most responses were over 20+ years of experience, which surprised me as I expected a wider spread. 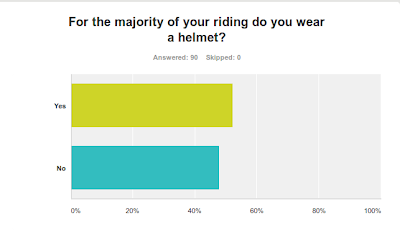 Fairly even split for this one overall, with 52% wearing a helmet and 48% not. 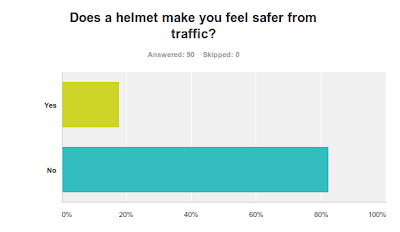 Expected this result, but not perhaps quite as high with 82% saying that a lid did not make them feel safer from traffic. From personal experience, I find that I suffer more close passes when wearing on and feel that this could be the source, as well as the fact that if a vehicle hits you at speed, then a helmet is not a lot of help. 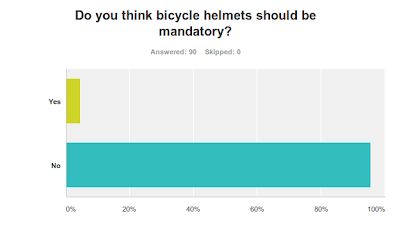 There you go. 95% of people who ride bikes don't think helmets should be compulsory. No surprise apart from the numbers. I expected a fair few more to be in favour actually.

There were only 4 in favour. 2 identified as fast recreational, and 2 as general leisure riders. All four answered that they wore a helmet (no surprise) and 50% feel safer with a lid & the other 50% don't.
All of those had been cycling less than 20 years & 1 less than 5, so presumably have always worn lids.

60% of all the respondents who cycled for more than 20 years did not wear a helmet. almost 90% reckoned it didn't make them feel safe from traffic, and 100% were against compulsion.