Who are shared paths really for...?

This post was triggered by a subtle comment to a photograph on an excellent post breaking down the hierarchy of provision and design process by the Ranty Highwayman which you can read here. Much more informed than I could muster.

The question posted was basically who are shared paths for, and who gets the most benefit? 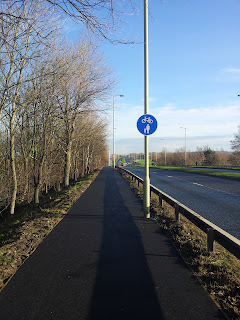 
The above picture shows a typical shared path alongside a busy dual carriageway with the Google street view on the right.

Pedestrians are squeezed and now have to share with cyclists and both are short changed by this arrangement as they are expected to share the relatively narrow path.

The real winners are the drivers, as they can now zoom along with even less risk of been held up or just having to be alert to people riding along on the road as all but the bravest and fastest cyclists have been effectively forced off. The other winner is the local authority who can colour in another route and add more miles to the "cycling network" earning them more grant money by ticking boxes (see footnote)

You can understand why some pedestrians feel aggrieved that having to share the space that used to be their sole domain with cyclists that can rush along at several times their speed. Both parties need to be more alert, while the drivers get away with having less to look out for.

To make matters worse the shared path on that carriageway terminates at a toucan crossing, & the cycle route crosses the road to carry alongside the other carriageway.

The footpath although carries on, so legally cyclists aren't permitted, but most will carry on anyway. This enforces the view amongst the novice cyclists that riding on all footpaths is permitted which just increases the angst amongst some.

Incidentally, this route links several primary schools, and only the schools - how much traffic between schools? Probably not a lot, but gets decent grants from the various funds (A cynical view I know).