The myth of "Mutual Respect"

You often see comments and articles suggesting that cycling in the UK would be great if only everyone showed mutual respect.

Below are two from Helen Russell writing in the Metro Newspaper  from last year after Bradley Wiggins was hit by a car from last week following EmmaWaygate. Other articles are available. 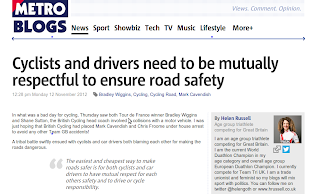 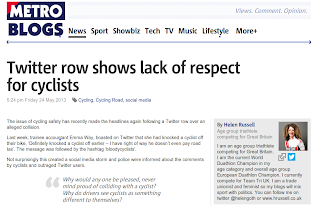 Both of these articles talk about mutual respect between cyclists and motorists. Both of them and most of the other articles miss one important point which is that in these examples only one side didn't show respect and that was the drivers.

Mutual respect is a myth perpetuated largely by seemingly naive people, who seem to think that all the world needs is for people to be nice to each other.  Complete bullshitty touchy-feely nonsense. It's like asking bullies and bullied to show respect.

I'm sorry to burst the bubble, but mutual respect does not exist in society, let alone the roads. If it did we would not need to lock our doors at night. Shops would not need to employ CCTV etc to catch thieves. There is an element of the population which will do what they want in a selfish and sometimes dangerous manner. Those people usually also drive vehicles, or bicycles or walk dangerous dogs and couldn't give a flying f... about anyone else. That doesn't even include the half-asleep or distracted.

These selfish morons will always keep the perceived risk people have about cycling on the roads fuelled and burning as they ignore the rules of the road and endanger others. They will always tear around pedestrians on bikes making them scared of all cyclists.

Mutual respect is not the fix and will never make the masses feel comfortable enough to start riding bikes.
The only things that will change things for the better are all of the following, and :