One of the big manufacturing locations and success stories in the North East (despite it being a car plant) is the Nissan factory and accompanying infrastructure just to the west of the A19 at Sunderland.

Over the last year or so, works have been carried out and are still ongoing in some places, to remodel junctions and roads around the Nissan site to improve the road network and attempt to reduce pinch points.

From a cycling perspective, this has seen 3m shared paths on all the approach roads to Nissan, and some junction changes. Most of this work has been carried out by Sunderland council, and to be fair have been well executed.

At the northern most tip of this area, the junction of the A19 and A1290 has been extensively changed from a simple 2 roundabout interchange  (shown below). the roundabouts have now been removed and each replaced with a set of traffic lights.This work has been carried out by South Tyneside Council on behalf of the Highways Agency at a cost of £150,000 for the cycling portion (courtesy of this FOI reply) 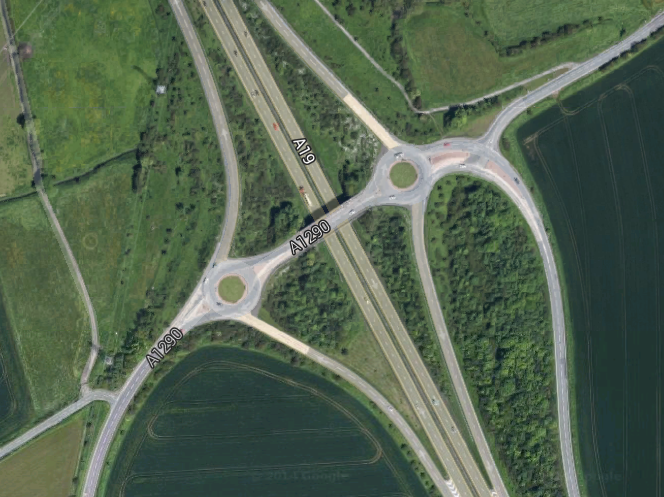 Crossing points have been put in just to the west of the southbound slip roads, crossing the slips, and the main A1290 carriageway.

There are a few shortcomings with the cycling provision at this new junction, which I feel should have been resolved during the design.

The crossings are all multi stage, and to cross from the north of the A1290 at the eastern side of the junction takes 4 separate light controlled crossings & button pushes on the Toucan crossings.


Whilst some of the crossings change automatically to green, this is at best a confusing crossing especially in the dark. A better solution would have been a single green phase crossing for pedestrians and cyclists, or at least to reduce the number of crossings.

As most of the users of the crossings are people on bikes, then this crossing could have been a great opportunity for a "green wave" crossing across the entire junction. By contrast a crossing at the junction of Nissan Way & Turbine way only a short ride away on my route is a simultaneous green crossing, but that is Sunderland Council. It however proves it could have been done here though.

Access from the new junction to the cycleway/bridlepath has been ignored. The 3 metre shared path abruptly terminates and reduces down to 2 metre just short of where the bridleway and road currently meet.

The most direct and shortest line to join the bridleway is via a set of muddy earth and mud steps down to the corner. of the bridleway. Ideally a  realigned and graded 3 metre wide shared path should have been provided north from the junction following the desire lines. Actually this is currently planned in as part of a larger scheme to rebuild the major junction just north of here at Testos (shown below), but that work is not scheduled to be completed until, approx 2019

Why was this not done as part of this work? Why do we need to wait 3 years?

There is no access onto the shared path from the minor road to the west of the junction. That road is a quiet lane leading to the A195/A194 junction and the Follingsby lane industrial park.
This seems to be due to the only focus being on north/south traffic towards the Nissan complex.
Improving junction access to Follingsby lane and subsequently improving safety along that road would have enabled a cycling corridor from East Gateshead to Nissan, Sunderland, and Boldon.
Whilst a 3m shared path along the north of the junction and an extra crossing point to join the path heading south would have been the ideal solution, even a dropped curb to allow cycles to be ridden across the A1290 and onto the path would have been an improvement.

The next alternative is the A184, which is a busy dual carriageway with very poor and limited cycling facilities.
Posted by Gazza_d at 03:01